Elo ratings for the Eastern Conference show the current landscape for team performance. Thanks to American Soccer Analysis, we can get a clearer picture by checking these ratings.

Elo ratings allocate points based on the outcomes of games played. Elo is also known as a "zero sum system," where all points that are awarded to a team for a win are subtracted from the team defeated in that match. The system also rewards teams for upsets. Take, as an example, a bottom table team taking out the conference leader; in this scenario, the bottom table team will earn more points than usual because of the upset and the conference leader will lose that same amount of points.

The current MLS form of Elo ratings, created by American Soccer Analysis writer Tom Worville, looked at goal differential from the 2014 season to create a base rating. The Philadelphia Union, which had a goal differential of 0 (scoring and conceding the same amount) was given a total of 2000 points, and other teams were ranked either higher or lower than the Union depending on their goal differential (a team that scored more goals than it conceded would have a score greater than 2000).  After goal differential, the model takes into account the result of the previous match between two teams, thus becoming fluid.

Below are trending Eastern Conference Elo ratings up to July 18, 2015, with current numerical Elo ratings at the bottom of this article. 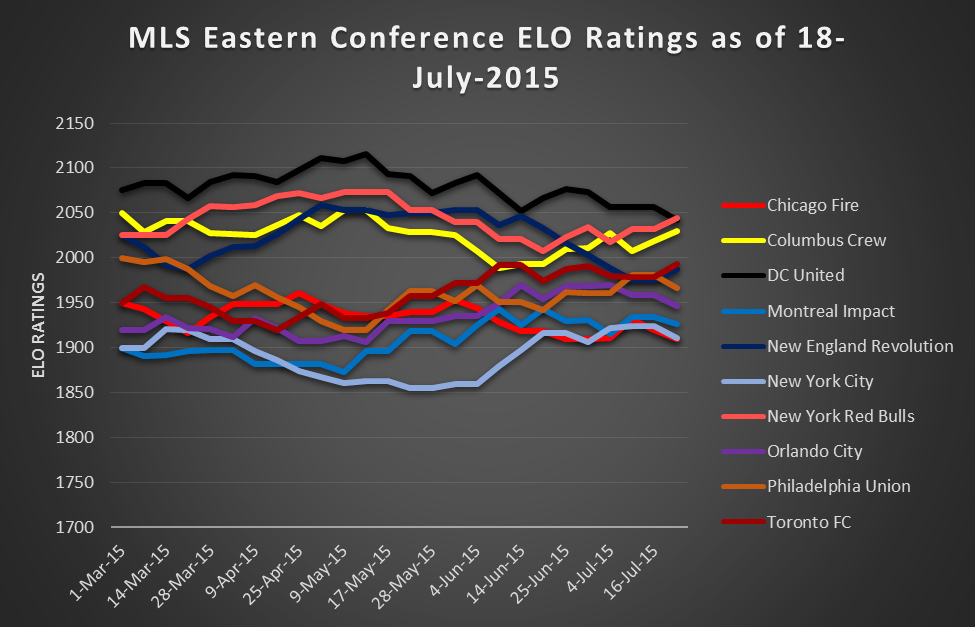 The Elo ratings do not mirror standings exactly, as seen when comparing the current Eastern Conference standings to the current Elo ratings; but, they can show insight on team performance within the competition. The top three teams in the Eastern Conference MLS standings and Elo ratings currently sit, on average, 100 Elo points above the fourth-place team -- Toronto -- while standing 4.3 league points above the fourth-place team as well. Clearly D.C., Columbus and the Red Bulls are playing some good football.

But the mane concern here -- apologies for that pun -- is that Orlando is on the cliff that denotes the difference between a playoff team and a team that gets to sleep while others play for trophies. In Elo ratings, Orlando currently has 1946 points, good for seventh place, while, prior to Saturday night when Montreal passed Orlando on total points, they were sitting in sixth place in the Eastern Conference playoff hunt (six teams from each conference make the MLS playoffs).

Also, if you look at standings by points per game played, Orlando currently sits seventh -- exactly where the Elo ratings show them to be. Unfortunately for the Lions, they are on a downward trend, dropping 24 Elo points from their season high of 1970 on July 4.

The purpose of this article is not to point out that Elo ratings are wonderful or that this miraculous way of measuring performance can give us new insights into the world of football. Rather, the point of the article is to imply that Orlando needs to pick up the pace and find something to push the club into a new gear if the MLS newcomers hope to make the playoffs in the inaugural season and "Defy Expectations".