The Mane Land, an Orlando City and Orlando Pride community

With Orlando City SC's home opener revealed to help cap off MLS First Kick on Sunday, March 8, at 5pm EDT (first day of Daylight Saving Time), the team and its supporters have begun using a new hashtag on Twitter and Facebook: #FillTheBowl.

As expected, the team wants to ensure that Orlando City's first match sells out the entirety of the Orlando Citrus Bowl Stadium. It's not unprecedented. When Orlando hosted the 1994 FIFA World Cup at the old Citrus Bowl, every match exceeded 60,000 spectators, outselling most other host cities and surprising observers.

What will that take? Let's take a look inside the newly-renovated edifice and find out. 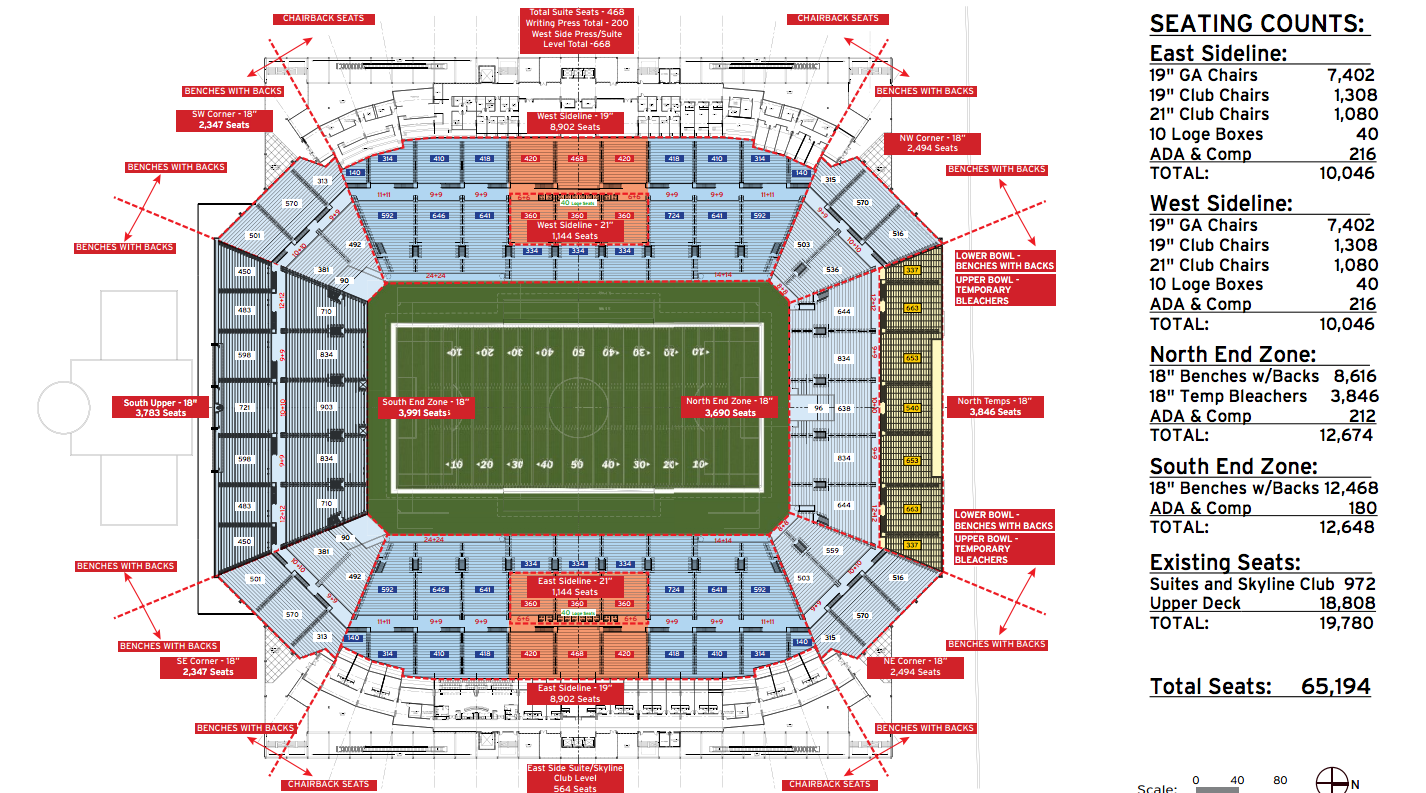 The seating chart of Orlando Citrus Bowl in all its glory. (Source: Bungalower)

The new lower bowl of the Citrus Bowl is entirely different from the old one they demolished this past January and February. The previous lower bowl consisted of the original sidelines built in the 1930s (west side) and 1960s (east side), augmented by a massive mezzanine constructed in the 1970s. The current press box didn't even show up until it was joined by the luxury suites with the upper decks in the 1980s.

The original lower bowl was all bleachers as well. The new lower bowl comes entirely with chair-back seats. The regular seats fold vertical, giving a feel similar to German stadiums.

The seats take up more room than bleachers, so they built a permanent North End on the 100 level to fill out some of the space. Temporary bleachers can be erected at the mezzanine level on the North End; when they're not in use, it will take the form of a "Party Deck".

As part of the new arrangement, the lowest bowl is still called the 100s. The Upper Deck is now known as the 200s. The Mezzanine sections are numbered an entirely different way.

Currently, Orlando City has reserved the 100 level, not including the corner sections. Not including ADA or luxury suite seating, that will accommodate 19,517 fans. That is about on-par with the estimated capacity of Orlando City Stadium in 2016.

The corner sections in the 100s would add an additional 4,027 seats, again not including ADA or luxury suites. The entire new lower bowl comes to 45,414 with the temporary bleachers, and 41,568 without.

Throw in the Upper Deck and luxury suites, and the total capacity of the Orlando Citrus Bowl is 65,194 with the temporary bleachers, and 61,348 without.

As an aside, the field dimensions surrounded by the new stadium are exactly the same. Front row-to-front row, the width of the pitch is roughly 77 meters (84 yards). That is plenty of space for soccer.

So what are the logistics of a full sellout for Orlando City?

It will be interesting to see how the rest of the stadium is sold to get the entire stadium full. But the task will be enormous, and it will take every fan to get the rest of Orlando to give soccer a try, and give it crowds here they haven't seen in 21 years.

More from The Mane Land